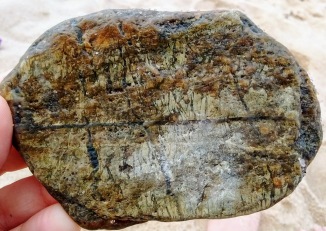 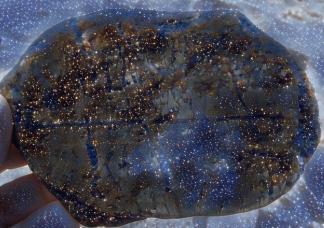 This is a rock we found on the beach near Provincetown. Joss says he thinks it looks like a woodsy landscape reflected in a lake. Can you see it?. I ran it through a starry filter, and it looks like a night-time lake.

Gratitude List:
1. Fierce and tender friends. People who hold the world in their hearts, and hold our hearts in their hands. You know who you are, Friends, and if you think I am talking about you here, I probably am.
2. Stories that teach me not to start with rage, but to start with compassion.
3. Honesty. Truth-telling. Getting it straight and clear. Cutting through the fog of lies.
4. Water. Purifying and cleansing. Refreshing. Rain on dry earth.
5. The smell of the rain on dry earth. That scent of impending hope.

Tuesday’s Thoughts:
“I cannot fix on the hour, or the spot, or the look or the words, which laid the foundation. It is too long ago. I was in the middle before I knew that I had begun.” ―Jane Austen, Pride and Prejudice
***
“In order to arrive at what you are not you must go through the way in which you are not.”
—T. S. Eliot, Four Quartets
***
“We grow spiritually much more by doing it wrong than by doing it right.” —Richard Rohr
***
“Whatever gets in the way of the work is the work.” —Jason Shinder
***
“An agricultural adage says the tiny animals that live below the surface of a healthy pasture weigh more than the cows grazing above it. In a catalogue selling composting equipment I read that two handfuls of healthy soil contain more living organisms than there are people on the earth. What these beings are and what they can be doing is difficult to even begin to comprehend, but it helps to realize that even though they are many, they work as one.”
—Carol Williams
***
“All human nature vigorously resists grace because grace changes us and the change is painful.” —Flannery O’Connor
***
“I don’t know about you, but I didn’t become an environmentalist because someone made a rational argument that convinced me that the planet was in danger. I became an environmentalist out of love and pain: love for the world and its beauty and the grief of seeing it destroyed. It was only because I was in touch with these feelings that I had the ears to listen to evidence and reason and the eyes to see what is happening to our world. I believe that this love and this grief are latent in every human being. When they awaken, that person becomes an environmentalist.” —Charles Eisenstein
***
“You can’t dismantle the master’s house with the master’s tools.” —Audre Lorde
***
“The owl,” he was saying, “is one of the most curious creatures. A bird that stays awake when the rest of the world sleeps. They can see in the dark. I find that so interesting, to be mired in reality when the rest of the world is dreaming. What does he see and what does he know that the rest of the world is missing?” ―M.J. Rose, Seduction

Mockingbird Says:
“Protect your nestlings with every ounce of courage and ferocity you can muster.  Whether it be Monsanto or a kitty cat, zip in in a whir of flashy feathers and nip them on the nether regions–just like this!  Aha!”

–Oh, Mockingbird!  Yes.  I do get your point, and so, unfortunately, does little Miss Winky.  Poor Kitty Cat.

Gratitude List (the typical 5, plus a few bonus from an amazing weekend with my gang of college friends and their children):
1.  Lasting friendships, powerful in their intentionality and their serendipity
2.  Scott’s rock and sand collection
3.  Awakeners
4.  A happy gang of kids, riding bikes, playing games, swimming, giggling, sharing jokes. . .
5.  Being part of the cold and broken hallelujah (Leonard Cohen)
6.  Late late night conversations around the fire, sharing the bitter/sweets
7.  Walking out of the labyrinth
8.  This moment: We were sitting around in the shade yesterday morning discussing shame and the impact it has on our parenting, and how it is used in schools.  Before long three of the children had gathered with us in the circle, and they started telling us their own ideas about effective and ineffective behavior management in school, about what seems fair and right and what is a violation of their sense of self.
9.  Taking pictures of the fire with Luke
10.  Africa House, where we stayed

May all beings be blessed.