On Saturday, I began a poem as I was sitting in the last of the author presentations at the Millersville Literary Festival. I wrote, “I didn’t even know I was drowning.” It’s true. I knew I was searching for something, trying to break out of ruts, to focus my scattershot writing process, to find others like me. I’ve been resisting settling into my identity of Teacher because there has been this other powerful identity pushing up like a long-dormant wisdom tooth, painfully shoving everything else to the side. I call myself Poet, but I don’t seem to know what that means. I secretly call myself Writer, but I don’t know how to create a picture of that in my life, one that means Me. Here’s the blog, there’s a stack of 200-some poems that are essentially unpublishable because I have already published them on the blog and on Facebook, over there is the half-plotted novel with a couple of messy chapters hanging out of its drawers, and over there another half-formed, half-written book on magic and spirituality and the Wheel of the Year.

I’m not sure entirely what that life preserver consists of, but I felt it within my grasp at the exact moment that I realized I have been sinking. Community of writers, perhaps–the theme of the festival. There are others like me, teaching and writing and parenting, feeling the pressures of all the pieces, and still forging forward. I’ve spent the last six years feeling like I was putting the real Writer in the backseat so I could focus on being the Teacher, and the ten years before that squelching the Writer so I could be Mother and Farmer.

It’s time to begin swimming with both arms, and to kick with my feet. Stop pretending that I am just a pretender. Live into the Writer’s identity, so that I can stop fighting being the Teacher, and let them dance together. Let them both hold me up.

sI didn’t realize I was drowning until I was no longer drowning. Take a deep gulp of air, slip into the circle of that glorious floaty ring, whatever its name is, swim with both arms and kick with my feet. Here we go.

Gratitude List:
1. Writers. Storytellers. Poets. Visionaries. Thinkers.
2. The life preserver
3. That particular red of certain oak leaves in early November
4. Considering the stories of the goddesses who descend–Ishtar/Inanna, Persephone–and Mother Holle, who mentors the young women who seek themselves within their depths
5. Giving myself permission

About a week ago, I had an extremely unsettling dream, which is not uncommon during stressful times and times of seasonal change. I wrote about it the following morning:

In the dream, we decide that our car is amphibious, so we drive it through the pond. Surprisingly, it works, and only starts to sputter when we get to the other side. On the way, we see a phainopepla, a shining blue bird with a little red on its crest. It’s sitting on the water in a short of moon shape, break in the air. It’s very thin. As we approach the other side of the pond, we see an alligator in the shallows! This is exciting!

We start to climb the hill on the other side and the alligator follows us. The hill is steep and rocky and the alligator is FAST. We’re not really worried. Ellis sort of jumps down toward the alligator to see which way it will take. Ellis is on a sort of a sled. Suddenly the alligator leaps up and catches Ellis and they zoom down into a rocky hole.

Just like that, they’re gone. I can’t believe it. I try to rewind the dream. I try to make a different thing happen. I try to make him come shooting out of a hole at the base of the hill, but my dream won’t let me take over. He’s just gone. I throw rocks into the hole to try to kill the alligator so it can’t hurt Ellis, but then I realize that the rocks will hurt Ellis. We cannot find him. He’s just gone.

I’m weeping in my dream. People want to talk to me, to comfort me, but I won’t look at them. I keep trying to rewind, to go back, to make it be different, to hold him, to warn him, to know the danger before it happens, but nothing works. As a last resort, I wake myself up, and lie there waiting for the dawn.

Friends offered so much wisdom. My son is growing up. At every single stage of his development, my pride in his developing independence has wrestled with my anxiety about letting him go. This has some obvious connections in the story.

Another friend simply wrote to me, “Demeter. This is the time Persephone descends.” This hit me like an arrow. The thing that rode on my back all day after the dream was the sense of un-comfort-able grief. I refused to be comforted. I felt like I was living in Demeter’s heart.

Grateful that I can feel myself so connected to the goddess of the season, and grateful that I have images for my anxiety about my own child growing up, I began to look at other layers. In the days before my dream, we had first begun to hear of allegations of sexual assault against a man running for one of the most ethically-based jobs in our country, an assault that occurred when they were both teenagers. In my daytime world, as a teacher in a high school, I have hundreds of daughters: young women who are wide awake and speaking their minds; young women who are sleeping, unaware, lulled by cultural signals about who they “should” be; young women who are actively trying to stay in the relative “safety” of their cages; young women who are dawning, awakening, bursting forth. I cannot protect them all.

And this story we are living in the US today, it’s as ancient as the oldest myths and stories, isn’t it? You know the story? In brief, Hades, the god of the underworld, kidnaps and rapes Persephone, the teenaged daughter of Demeter, goddess of cereal grains and fields and farms and the earth’s abundance. Demeter cannot be comforted. She is distraught. She wanders the world in her anguish, seeking her daughter, but her daughter cannot be found. Finally she approaches Zeus, god of the sky, leader of the Olympians, to ask for justice for her daughter. But Hades is Zeus’ brother, and Zeus is hesitant to upset his brother. Finally, he acquiesces, but only after Demeter refuses to make things grow, and the people start to die. Unfortunately, because Persephone has eaten six pomegranate seeds in the underworld, she must stay with Hades for half of every year, and can only rise to the upper world with her mother for half of each year.

Here is how it happens: A man who lives according to his shadows, according to the instinct of his reptilian brain, attacks a young woman. He has taken something essential of her Self captive, claimed it as his own. She may walk again in the sunlight, but part of her will always reside in the halls of shadow. Her mother (the women) wander the world in grief and rage, demanding justice, but the one to whom they can go for justice in a patriarchy is a brother to the attacker, and he’s more interested in preserving his power and his relationship to his brother than in meting out real justice for the woman. Hades continues as a powerful god. Demeter grieves and rages in her cycles. Persephone continues to be held captive by her memories and the trauma that now resides in her body.

Are we strong enough to break the cycle? 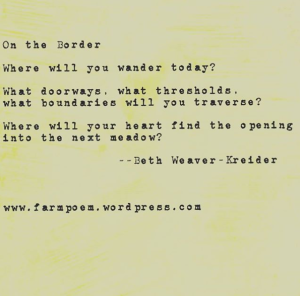 Quotes for the Day:
“To survive, you must tell stories.” ―Umberto Eco
***
“Over the years, I have come to realize that the greatest trap in our life is not success, popularity, or power, but self-rejection. Self-rejection is the greatest enemy of the spiritual life because it contradicts the sacred voice that calls us the “Beloved.” Being the Beloved constitutes the core truth of our existence.”
―Henri J.M. Nouwen
***
“We learn from our gardens to deal with the most urgent question of the time: How much is enough?” ―Wendell Berry
***
“This is what you shall do; Love the earth and sun and the animals, despise riches, give alms to every one that asks, stand up for the stupid and crazy, devote your income and labor to others, hate tyrants, argue not concerning God, have patience and indulgence toward the people, take off your hat to nothing known or unknown or to any man or number of men, go freely with powerful uneducated persons and with the young and with the mothers of families, read these leaves in the open air every season of every year of your life, re-examine all you have been told at school or church or in any book, dismiss whatever insults your own soul, and your very flesh shall be a great poem and have the richest fluency not only in its words but in the silent lines of its lips and face and between the lashes of your eyes and in every motion and joint of your body.” ―Walt Whitman

1. The greening. Fields and lawns and grassy patches everywhere. Persephone rises.
2. The sap is rising. You can see the life force in the trees, pushing color and light into the limbs. Persephone rises.
3. Aconite and crocus. Persephone rises.
4. The young ones are rising, speaking their voices, leading the way.
5. We saw a great horned owl today. Harried by crows, it flew into the tops of the poplars on the hill above the pond. It waited where couldn’t see it for quite a while, until the crows got bored and flew off. Then it took wing back to the trees up the the hill. 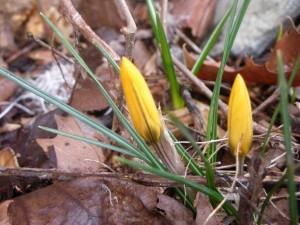 The crocus spring up.
Persephone is rising.
My heart awakens.

Gratitude List:
1. That green Cholula hot sauce–poblano and jalapeno–that Jon bought yesterday.  At the risk of sounding like a food snob: It was revelatory.
2. Poetry
3. The little elves in the house who got up at 6:15 to start making birthday preparations for their dad.
4. Jon Weaver-Kreider–I don’t mention him here very often because I don’t want to intrude on his privacy by throwing him into my public spheres, but he could be on every gratitude list I make.
5. Loreena McKennitt–I  haven’t listened to her in a long time, but a photograph this week sparked a memory of her music, and I am rediscovering her.

Gratitude List:
1.  A delta of snow geese flying above the River last night.
2. The sunset: first a tangerine glow that seemed to shimmer around us, then magenta, and finally crimson.
3. Dandelion tips growing in my brother’s flower beds.  Persephone rises.
4. Teaching myself to go back to sleep.  (Knock on wood)  Not only have I not had midnight insomnia for ages, I have been sleeping until 6:30 lately.
5. Dreams that remind me I’m okay.

May we walk in Beauty.