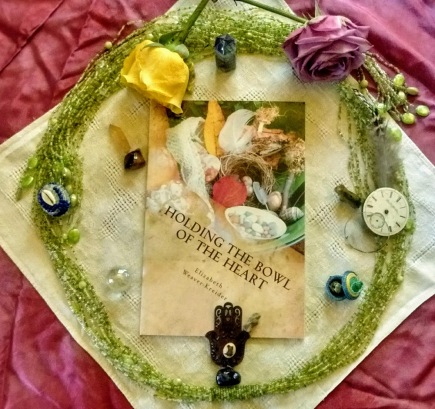 I’m setting up the FB page for Skunk Holler Poetryworks. I think I need to get out the better camera and a tripod to try to make it crisper.

Some days, some weeks, the visitations come so clustered and thickly that I simply can’t ignore the fact that Someone has something I need to hear. Hummingbird is a regular. Snake was a startlement. Vultures are pretty common, like hummer, except. . .

A couple days ago, I wanted to return to my meditations at the beginning of the year, to revisit the idea of matter, enmattering. I read through my blog posts from early January, and jogged my memory about the dreams I had been having. Among them, a startling dream about an encounter with the child-spirit Ellegua of Afro-Caribbean spiritual traditions.

While I want to be careful about not assimilating and taming and taking over the religions of other people groups (as white people are wont to do), I have been fascinated by the spirit world of Afro-Caribbean traditions and have studied them somewhat extensively, so it’s perhaps not surprising that Ellegua appeared to me in a dream. There were vultures (six, I think) in a field, and Ellegua took my hand and pulled me toward them. I didn’t want to touch them because I thought their feathers would be matted with dried blood and offal. Instead, they were soft as down, and the vultures bobbed their heads at us.

So the day after I renewed my memory of the vulture dream, Ellis and I encountered a pair of black vultures, one flying low over the road in front of us, and the other alighting on a telephone pole and looking down at us curiously as we passed slowly beneath it. That was yesterday. Today, on the way to school, we slowed down beside a field to watch four turkey vultures in a field. They eyed us closely as they hopped over the stubble, and for the first time in my years of watching them, I noticed the pronounced black and white “spectacle” marking in front of the eyes.

I was marveling at the triad of vulture visitations (noting that there were six vultures in real life now, like there had been in the dream) when I had to slow down again for a small creature running across the road ahead of me. Long, low, thin, and blondish, I thought, “Weasel!” and that’s what it was! I’ve never seen one in the wild. Otters. A mink. But this was my first weasel. Vultures and weasel.

This afternoon, as I was helping out with group activities for ninth graders outside the school, a ruckus of feathered folk burst out of a tree nearby: a really large crow followed by three smaller birds, flickering orange like little flames in the sun. Orioles! Three males chasing a crow. Perhaps it was after their little ones. But it felt like a message to me. Three flames. One great big mystery.

In my list of messengers, do I include the great blue herons that flap across my field of vision every day or so? They’re definitely on the move. The early butterfly sightings? The groundhogs standing on their hind haunches, surveying their fields like the farmers they are?

It’s a lot to ponder.

Do you get visitations, too? Periods of time when the animal- and bird-realms, and maybe plant- and tree-realms, or stone-realms, seem to come in clusters and chunks, with messages that you can decipher if you only take the time to meditate and contemplate their meanings?

I write this in the moments before I head upstairs to dream-time. Perhaps I’ll find more images there to enrich the story.

I am a poet, mother, and English teacher. Click the HOME link on mockingbirdchronicles.com to order my poetry books: Holding the Bowl of the Heart, and The Song of the Toad and the Mockingbird. The cost is $15 for the book and for shipping. View all posts by Beth Weaver-Kreider

What do you think? Cancel reply

This site uses Akismet to reduce spam. Learn how your comment data is processed.