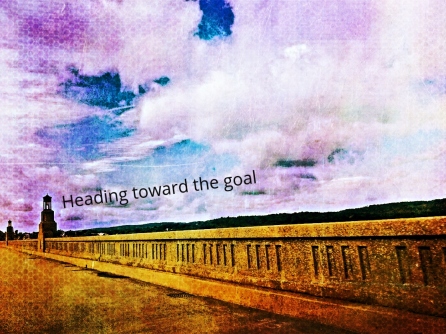 Gratitude as Resistance Two:
Meeting the Goal. I try not to talk too much about things like weight loss in a public forum. My first goal–always–even though my inner world doesn’t always actually manage it, is to love my body like it is. As a teacher of teenaged women, I believe that young women desperately need models of women (especially round ones) who are comfortable in our skin. So I try, really hard, to avoid the subject of the D-word.

On the other side of that is a little problem I’ve been carrying around called the Trump Ten.   In the months after the inauguration last year, I let myself eat whatever and however I wanted. I was The Comfort Eater. In three months, I added a solid ten pounds to my body. When it hit me, I thought I would just stop the comfort eating and go back to normal. Then I thought I would cut a meal a day and go back to normal. Then I decided that it was impossible to lose weight after 50.

But I kept carrying this extra ten pounds around, and now it felt like I was wearing the president and his team of destroyers around on my hips. (Honey, you’ve GOT to get rid of that!) And at the same time, I realized that my joints were achier than ever, that I was getting winded climbing stairs. Uh-oh. That’s not good.

So I got serious, did some research, and came up with an eating plan. I don’t call it the D-word. I call it Nourishing Myself with Great Care. I think I have been eating more, actually, than I was when I was skipping a meal. I’m defiant by nature and will never follow someone else’s plan entirely–I cobbled together some ideas that made sense to me. I whip butter and coconut oil into my coffee every morning. I eat something called a fat bomb for snacks. I eat a LOT of avocados. I eat less at supper than I used to, but I have the occasional cookie, the occasional bowl of ice cream. I know my hedonistic self enough to understand that without treats, no eating plan would be sustainable, especially when my new favorite show on Netflix is The Great British Baking Show.

I get hungry. A lot. But I’m learning that sometimes hunger actually means thirst. Sometimes it means boredom. And a lot of the time, it means angst or despair or worry or rage. I have to feel the feelings. Sometimes I would like to go back to covering them up with carbohydrates, but I’m trying to be like Rumi and welcome each feeling into the guesthouse of myself. In this day, when so many of the waters of the world are threatened, taking a long drink of water when I feel the aching hole inside can be like a magical or prayerful act of healing intention.

Yesterday, the scale told me that the Destroyers were gone, all ten pounds of Evil Administration. Gone. Two months of Paying Attention to eating, and I met my goal. That’s the first part of the gratitude.

But the second part is that last Wednesday as I was walking up the steps to my classroom, I realized that I was walking in the middle of the steps, not using the railing to drag myself up, not dreading the steps, not breathing heavily at the top. I still ache like a fifty-something, but the extra edge is gone. I think reducing sugar and grains has had a marvelous effect. I haven’t been diagnosed with arthritis, but it’s been in the family, and I would like to avoid it as long as I can. Also, my mother reminded me the other day that the empty carbohydrates in sugar and refined flour are implicated in depression. Again, while I have no diagnosis in that realm, I know how close I step to the chasms, and if a nourishing eating plan will keep me from the dangerous edges, I can keep to that.

This isn’t the first time in my life that I have done something like this. My pregnancy years pulled me out of the pattern of healthy nourishment, and while I have been somewhat careful in my eating, I never really went back to a serious intentional look at the sugar/flour content of my daily nourishment.

A small slice of pie, eaten with deep attention and intention, can give the same amount of pleasure as two slices eaten greedily. And now I can usually manage avoid the stupid calories of junky candy. If I am going to indulge, I want it to be something sublime. I still eat the second bowl of ice cream sometimes, and I might have two pieces of pie at a party or gathering if I feel like it. I need to defy, to break the rules at times. But it’s no longer a free-for-all, and in the long term, this way is safer for my physical and mental health.

I am a poet, mother, and English teacher. Click the HOME link on mockingbirdchronicles.com to order my poetry books: Holding the Bowl of the Heart, and The Song of the Toad and the Mockingbird. The cost is $15 for the book and for shipping. View all posts by Beth Weaver-Kreider

What do you think? Cancel reply

This site uses Akismet to reduce spam. Learn how your comment data is processed.